CloudKitchens Turns Shipping Containers Into Drive-Thru Of The Future 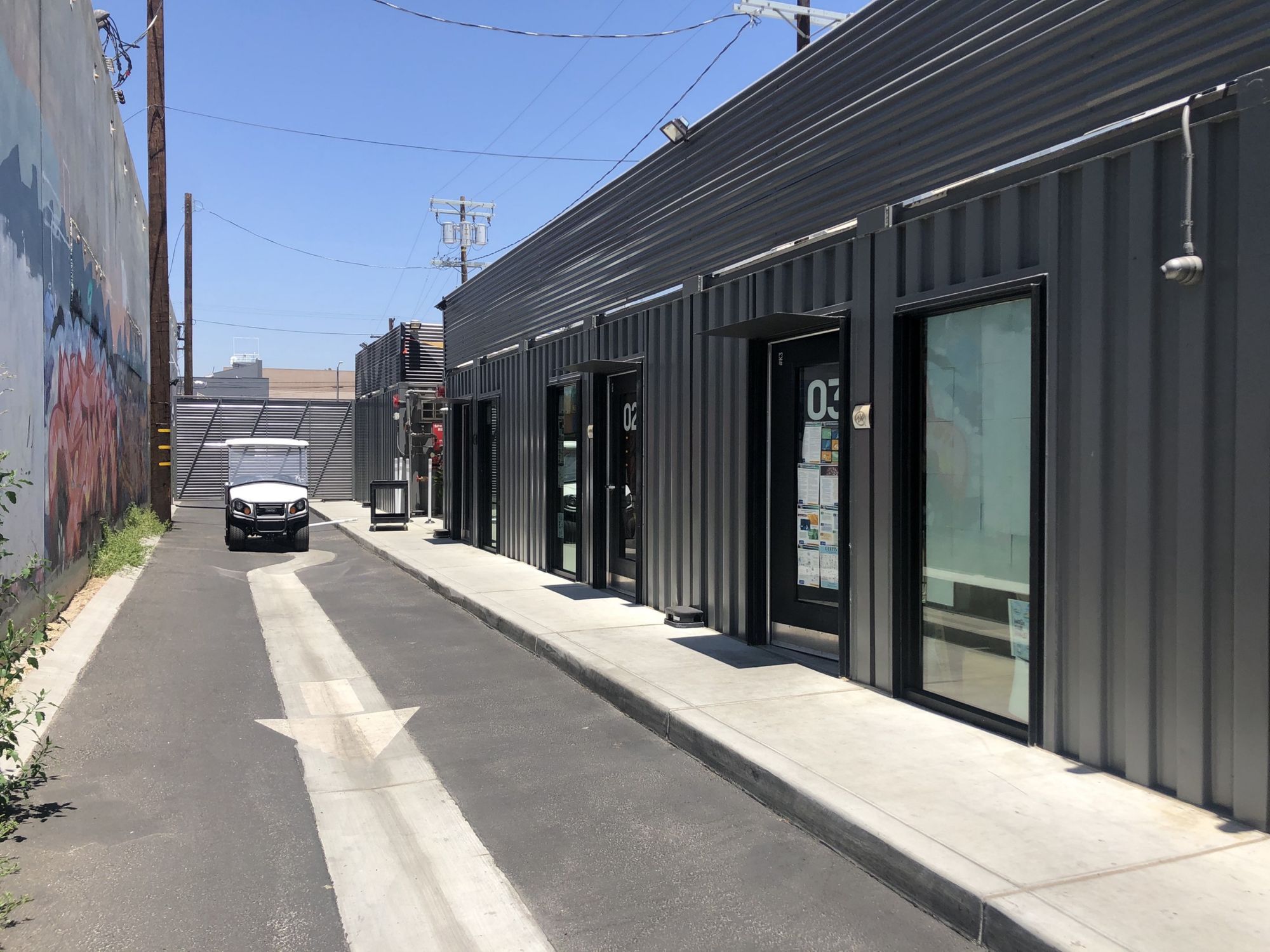 About four years ago, CloudKitchens co-founder Diego Berdakin purchased a 22,000sqft parking lot adjacent to the University of Southern California in South Central, Los Angeles for $420,000. According to The Information, CloudKitchens has since hired a team of 50 engineers to repurpose shipping containers into ghost kitchens and signed a $25mm contract to purchase them from Brooklyn-based SG Blocks, a publicly traded prefab company whose containers can be found everywhere from Starbucks drive-thrus to private residences in the Hamptons. CloudKitchens eventually canceled its contract and two CloudKitchens engineers leading the team recently quit. Today, the startup’s first modular site is now live as Grand Food Depot, what appears to be home to a future drive-thru concept featuring 17 separate storefront kitchens housed in three separate shipping containers.

The 40-foot-wide alley spans an entire city block and cost about $1.5mm to build out, according to permits filed with the City of Los Angeles. There are five buildings in total: three 1,400–1,700sqft kitchen containers, a reception/pickup area for delivery drivers, and a small storage area. There is a long, narrow road that spans the entire lot that is currently blocked by a gate but is planned to eventually be used as a drive-thru that would allow consumers to drive directly up to a kitchen to pick up their food. CloudKitchens staff currently use golf carts to shuttle food from each kitchen to the reception area, where delivery drivers can pick up orders. However, renderings depict foot and car traffic accessing the kitchens as storefronts. Unlike its other locations, the company has outfitted each kitchen with brand new equipment. Tenants include Tako Poke+Ramen, EatzThai, Honey’s Kettle Fried Chicken, Brady’s Bakery, and Umami Burger.

Brady’s Bakery is unlike its peers in that its kitchen space doubles as a commissary for its D2C e-commerce and wholesale cookie businesses. For owner and baker Reece Scelfo, the opportunity to tap into third-party delivery marketplaces while maintaining a physical presence for customers to see his operation made it worth the extra 40% premium compared to nearby commissary, Amped Kitchens.

“There’s something very experiential about food, people like to go up and see the pastry case with goods. You have the smells, you have people behind the counter, it’s an experience,” he explained. “With that experience comes high overhead.”

Scelfo has found that his best delivery hours are at 1am when his kitchen is closed, however CloudKitchens staff is able to fulfill orders on his behalf from its pickup window. During the day, local customers who order from its Shopify site are given instructions to pick up directly from his kitchen.

“Because of the drive-thru capability I’m seeing customers drive straight up to our door,” said Scelfo. “One thing they are testing is students from USC can come up to CloudKitchens and order a kitchen from Brady’s, thai food, and all the kitchens. Almost like a virtual food court.”

While foot traffic and delivery demand may become hampered by USC’s primary shift to online classes in the fall, drive-thru could become a meaningful sales channel for tenants. Last month, consumer insights firm Datassential polled 4,000 consumers and found that more respondents had visited a drive-thru (62%) than ordering takeout (50%) or delivery (38%). Drive-thrus were most popular with households with kids (70%) and millennials (67%). Imagine a family driving up to a large LED screen where they could order menu items across over a dozen concepts, with various items promoted depending on factors like the time of day, kitchen capacity, and even personally identifiable data like license plates. McDonalds has already taken the lead in this space with its $300mm acquisition of drive-thru AI company Dynamic Yield last year. Before the pandemic, it served 68 million customers per day, with drive-thru accounting for 70% of its sales.

While novel, prefab construction dates back to the early 1900s with companies like Sears, Roebuck, and Co. selling $1,100 homes. Over the last twenty years, they’ve become increasingly popular in retail applications, promising lower construction costs, fewer building permits, and faster turnaround times as buildings are constructed off-site before being assembled on-site via crane. For example, UK-based Deliveroo has been deploying modular shipping containers in underutilized parking lots for its Rooboxes, which serve delivery-only concepts from notable restaurateurs.

Over the last decade, Las Vegas entrepreneur Michael Manion has been building custom modular bar pods outside of stadiums for brands like Jameson and Budweiser. Two years ago, he founded Kitchen Podular to help restaurateurs meet off-premise demand from 330sqft pods on non-traditional real estate. Fully outfitted kitchens cost $250k and can be delivered in 4–6 weeks. The company has partnered with Middleby to outfit its all-electric, ventless kitchens that allow it to fit 800–1,200sqft of traditional equipment into a smaller footprint.

“All construction is moving prefab and this is why: if you get a traditional building you have to bring it up to code, that’s gonna take nine months to a year. Then you have to get tenants to fill it,” he explained. “I get sign-offs at my factory, all we need is a water line and power to connect into to open up for business. The process doesn’t get locked into the minutiae of bureaucracy.”

Manion, who is working with chains like Marco’s Pizza on single drive-thru locations, is skeptical of the idea of a 17-kitchen drive through. He finds that grouping multiple pods together to be challenging as larger brands need the kitchens to be deployed within 3mi of a brick and mortar location to extend their delivery radius. Maintaining that radius for more than two or three brands is challenging.

“Instead of putting your eggs in one basket you can do that in 10 locations across the city,” he explained. His vision is to turn excess parking spaces in a strip mall into two separate drive-thrus with a third pickup pod for an ice cream vendor. He is even outfitting some pods with roof patios that can fit 16 socially-distanced people. There are also temperature-controlled pick up cabinets (PUCs) that can support advance online pickup orders.

“Dining rooms grew out of walk-up windows. Taco John’s started that way. All these older brands all started with pickup windows,” said Manion. And as anyone who has seen Michael Keaton in The Founder can attest– “even McDonalds started this way.”

Welcome to the drive-thru of the future. Please place your order at the virtual food court and pull up to kitchen #04.