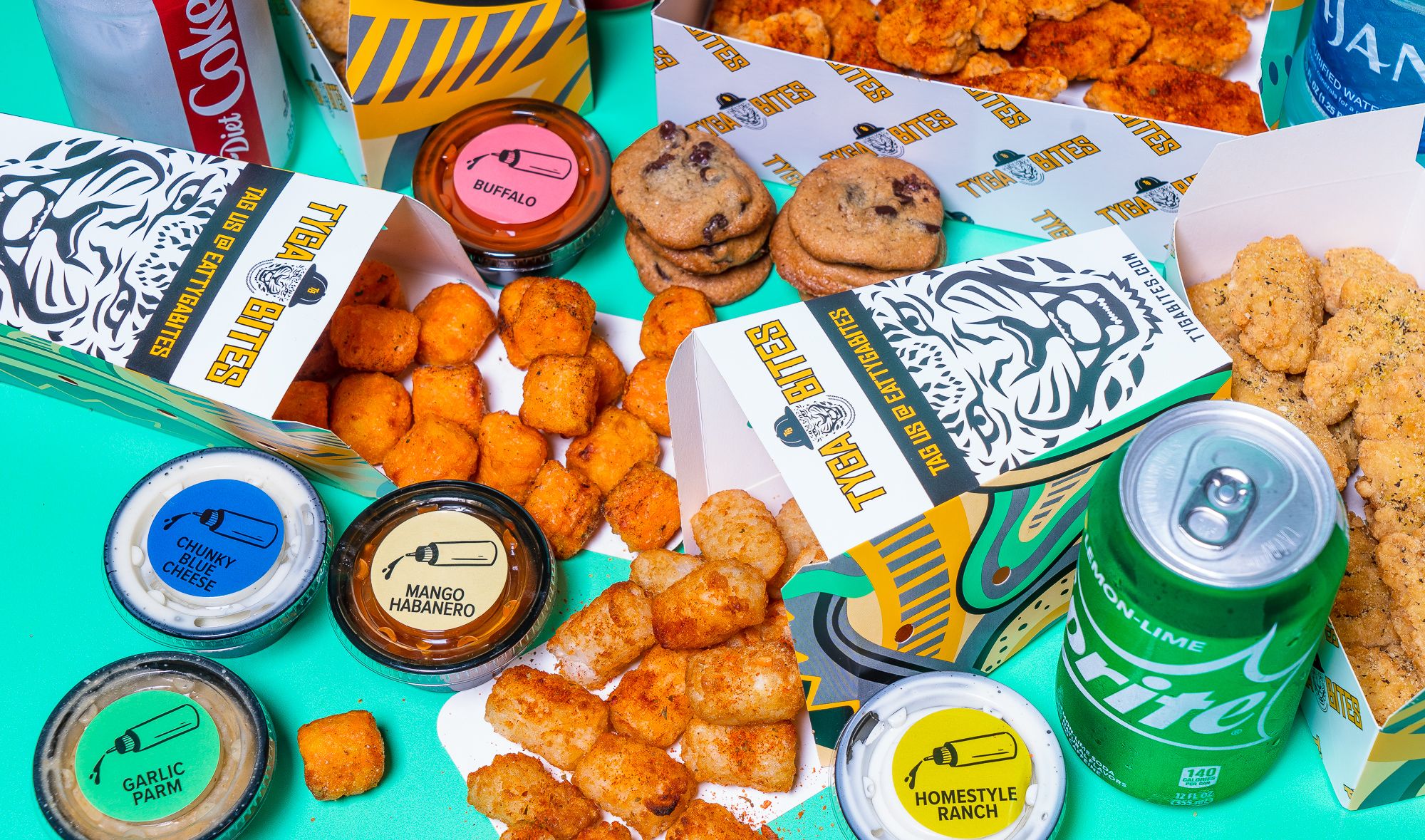 What do Wiz Khalifa, Tyga, Pauly D, Steve Aoki, and Travis Barker have in common? They’re all part of the inaugural class of celebrity-themed virtual restaurant brands deployed in ghost kitchens and existing brick-and-mortar restaurants seeking a new lifeline. According to Second Measure, as food delivery grew 158% YoY in August, tech startups and celebrities have formed new partnerships to design turn-key dishes to sell through brick and mortar restaurants in need of an extra boost. Within the next year, Virtual Dining Concepts, a subsidiary of Earl Enterprises has a goal of reaching 20 celebrity and 20 consumer brands in its delivery portfolio. The pandemic, combined with targeted social media advertising and the omnipresence of delivery platforms have brewed the perfect storm to fill a massive supply of kitchen capacity with these new concepts. Combined, all five of these celebrities have over 68 million followers on Instagram.

At their core, these brands are franchise partnerships between celebrities and delivery startups (Nextbite, REEF Kitchens, Family Style), or larger restaurant chains like Earl Enterprises, which has created a Virtual Dining Concepts subsidiary to oversee all things digital. The brands are packaged up and licensed to a mix of operator-owned and third-party affiliated restaurants, and sold via third-party marketplaces. After all food costs and delivery/licensing fees are accounted for, restaurants can net as much as 30% profit on each order, assuming no incremental labor. If their delivery commissions range from 20–30%, celebrities and their tech-savvy partners can share anywhere from 15–25% of gross revenues. Think Travis Scott x McDonalds, but scaled to any restaurant with a tablet, packaging and ingredients.

“98% of restaurants have extra capacity, even if it’s at certain dayparts,” explains Alex Canter, CEO of Ordermark, the owner of Nextbite, which dubs itself “the fastest growing restaurant company in the country,” according to its website. “We are looking at the excess capacity of restaurants saying we want to help keep their doors open by lighting them up with additional orders from a suite of brands. There’s nothing more impactful than what we are doing for restaurants than turning on a celebrity-driven brand that can turn on a ton of revenue out of their same kitchen. I can’t tell you how many times we’ve heard a restaurant say you’re keeping our door open with these concepts. We have restaurants doing more volume off our virtual brands than volume with their own restaurant.”

One of those businesses isn’t a restaurant, but rather a nightclub in Mid-City, Los Angeles. Catch One was one of the first black discos in the US and was sold five years ago to new ownership. Over the last six months, it has been cooking nine Nextbite brands: The Big Melt, The Wing Dynasty, Wild Wild Wings, Grilled Cheese Society, Outlaw Burger, Firebelly Wings, Mother Clucker, Crave Burgers, and most recently, the celebrity-driven Hotbox by Wiz. The club was able to hire seven staff to manage the operation, which its owner refers to as “an incredible lifeline.”

“This helps us pay down some of our loans and expenses versus racking up expenses with no revenue to pay for it,” explains owner Mitch Edelson. “This is a great opportunity for other nightclubs and bars, especially in California where things are more restrictive. If you want to keep your business around when the pandemic is over and keep yourself busy and sane this is a no brainer. There are fixed costs whether you’re open or closed.”

The club has seen a large chunk of its sales after 9pm, when other restaurants close. Longer-term, Edelson says he will continue the program to satisfy the minimum threshold of food sales he needs to maintain his California liquor license and insurance policy. He has also integrated Nextbite at his Spanish restaurant, El Cid, a historic Silver Lake venue known for its flamenco dance performances and tapas. While it has been able to sustain a small amount of outdoor dining on its Sunset Blvd. patio, it wasn’t proving to be enough.

“It’s been extremely difficult because people think of us like an entertainment spot and less like a restaurant even though we have good food,” says Edelson. “Nextbite allows us to leverage our location to serve the people who live around us with core concepts that they engage in.”

According to Canter, who is also the fourth generation of Canter’s Deli, there are 5–10k restaurants on the Ordermark platform that could get started selling brands on the Nextbite platform in two to four weeks. Its software provides a single tablet that integrates with every major delivery platform and is leveraged by a wide range of restaurateurs from Subway, Papa John’s, and Veggie Grill to smaller independents. Nextbite has become an excellent sales channel for Ordermark, onboarding new restaurants like El Cid who want to throw their hat into the delivery ring.

On the other side is Virtual Dining Concepts (VDC), which is leveraging Earl Enterprises’ network of 212 owned and operated locations across the country like Buca Di Peppo, Bertucci’s, and Planet Hollywood. The spinoff is a team of 20 dedicated employees split into functions such as sales, onboarding, third-party marketplace integration, training, and finance. Last year, it began building out its portfolio of virtual brands like Wing Squad, Atomic Dogs, and OMV! Vegan Burgers, enlisting the expertise of Eric Greenspan, who ran a similar playbook out of CloudKitchens with his alt/grub/faction umbrella of virtual brands. In July, VDC announced Tyga Bites, its first celebrity-backed brand with rapper Tyga sold exclusively on Grubhub at launch before including other marketplaces. Within the next month, it will launch a line of “Pauly D’s Italian Subs” of Jersey Shore fame with Grubhub as an exclusive launch partner.

With Grubhub, VDC was able to rapidly onboard restaurants in over 1,400 cities across 34 states. The platform has been running targeted advertising to generate order demand as well as supply of partner restaurants on behalf of Tyga Bites. Similar to Ordermark, Gruhbub is able to leverage Tyga Bites to onboard new restaurants onto its platform, increasing GMV from which it takes a healthy cut. VDC charges restaurants a flat commission regardless of the platform consumers purchase from, simplifying the experience for restaurant operators who are used to negotiating different rates for each platform. However, it charges restaurants a higher percentage fee for celebrity-backed concepts than it does others, but all concepts generally tend to yield the same profitability when accounting for lower food costs of celebrity brands.

“We’re making sure we’re not that annoying third party that they have to deal with,” explains VDC’s VP of Sales, Kelly Grogan. “For all of our restaurants, as well as any restaurant coming on board, we want this to be a great revenue stream. We’re helping them make up for the loss of not having a dining room or not having an outdoor patio.”

Amidst heightened concerns around quality control and transparency in the mainstream press around licensed delivery brands, Grogan says VDC carefully vets existing Grubhub ratings of prospective restaurant partners as well as the celebrities it chooses to launch brands with. It has invested in test kitchens in New York and Los Angeles to nail down all aspects of a brand ranging from packaging, quality, ease of replicating, and how the technology can flow into the flow of a normal kitchen operation. VDC sets up restaurant partners with a select group of suppliers who can satisfy the specifications of dishes designed in its test kitchens.

“Our purpose is to take findings from our restaurants across the US and help deploy them to other restaurants. Test kitchens are critical to that,” explains Grogan. “There’s nothing worse than creating a virtual brand, putting it in other restaurants, and finding out that the packaging doesn’t hold up in the delivery times or you got soggy fries or chicken that isn’t crispy when it arrives or you have sauces that explode in the bag — all the headaches associated with delivery. We want to make sure it’s well vetted.”

Earlier entrants to the celebrity franchise craze include the Softbank-backed REEF Technology with Rachael Ray and Uber Eats as well as DJ Steve Aoki’s Family Style Inc., an early tenant of CloudKitchens, which is rumored to hold a minority stake in the company. Both groups have relied primarily on leasing or building their own ghost kitchens to deploy a portfolio of brands, creating a higher threshold for success compared to Nextbite and VDC partners who leverage virtual brands for incremental sales in pre-existing kitchens. Canter remains a strong proponent of asset-light delivery expansion, leveraging the mass influx of shuttered restaurants over the last six months.

“The whole cloud kitchen model is a volume game. You have to be a real high performing brand to be successful in that format,” argues Canter. “In my opinion, there’s been a bit of a market correction for restaurant owners. Hopefully there will be a healthier mix going forward. There’s not a huge need for additional kitchen space, there’s already too much.”

Let 2020 mark the year that food has officially taken the route of media–– unbundled and unhinged. Yo Pauly! Pass me one of them Italian hoagies and let’s call our boy Wiz to hotbox this whip!!